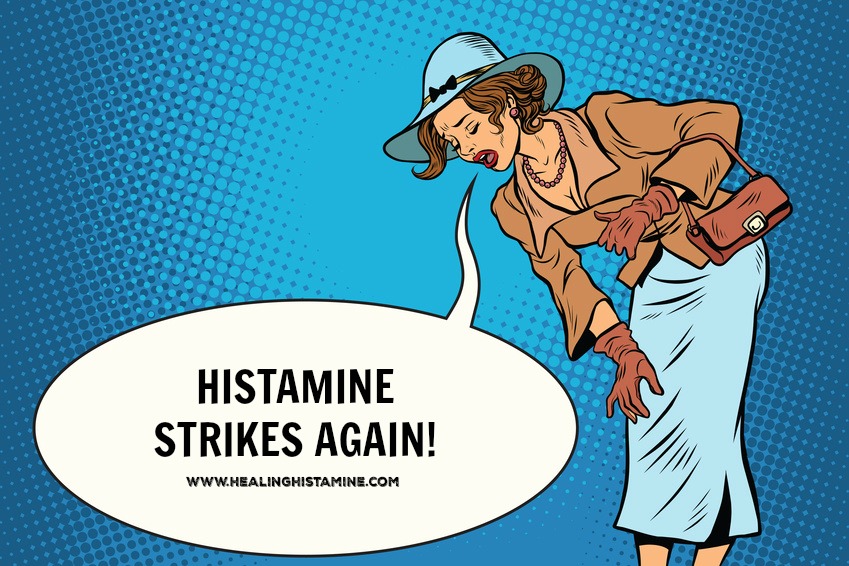 Conditioned taste aversion is a survival mechanism whereby animals learn to associate taste with a food that has made them sick; usually because it’s toxic or spoiled. In some cases the conditioned association between a food and sickness is so strong that the amygdala, the primitive part of the brain whose role it is to identify whether something is dangerous, can send the danger signal based on just the smell of a food alone. Sound familiar? Read on…references always at the bottom of post. Chemotherapy has taught us a lot about taste aversion. Patients undergoing treatment who experience extreme nausea or sickness during it may develop a long term aversion to foods eaten during those months. Granted, that’s an extreme example,  but some of us (myself included) have experienced years, if not decades of nausea (and worse) as a result of excess histamine or negative food reactions. Histamine, dopamine, acetylcholine and serotonin are involved in the control of nausea and vomiting. I stashed Motilium, a dopamine agonist that prevents nausea/vomiting in my handbag, by my bedside, and in my car for years. Really years. Took it pretty much every day. As a kid I projectile vomited regularly. As an adult too really. Most memorably it’s happened while walking down the street, behind a curtain at a black tie function (while sober), and many others. I think I may have, like chemotherapy patients, developed a conditioned taste aversion to foods (which triggered  major nausea every time I ate), or my inflammation bucket was so very full (read more about the bucket theory here) that it kept spilling over no matter what I ate. So how does behavioural conditioning like taste aversion actually work? Exciting research by scientists and those studying behaviour have shown that our beliefs affect the immune system. For example, they have found that placebos work (when they do) because people believe their doctor. They have faith that the medicine will heal them. But a more exciting discovery was made in the last few years: that the immune system can be conditioned to  respond in a certain way by association with a subconscious stimulus. In her fascinating book CURE, investigative reporter Jo Malone interviews doctors and researchers at the cutting edge of the field of psychoneuroimmunolgy. They believe, and have proven, that behavioural conditioning can reproduce the effect of certain medications on the immune system, regardless of whether the patient believes it will heal them. The scientists came up with variations on: giving an open placebo pill to patients (that’s there someone knows the pill is sugar/an inert substance), with a real medication, paired with a certain piece of music, and a liquid with an incongruous taste (ie a red drink that tastes like banana), at the same time in the same place. A few weeks and the medication would be reduced (or eliminated depending on the severity of the patient’s condition) but the rest would continue (music, drink, open placebo). They found that the immune system continued to behave as it did when given the full dose of the real medication. So despite the patient being fully aware that the medication was removed, their immune system had been conditioned to behave in a certain way. Researchers have proven this in particular with asthmatics and measuring histamine released when the patients were stressed by believing they were being exposed to an allergen. That’s how powerful conditioning can be. That’s also how negative conditioning could be tripping us up. If our immune system has been conditioned to respond to certain foods by releasing massive amounts of histamine, then this could keep going on even if the original issue has resolved. Let’s say you were going through a time of immense stress, or eating while stressed at your desk always, or struggling to keep your cool with kids at your hem while cooking and eating, or had unpleasant family meal times, or were sick for a time, whatever, and your immune system came to associate stress with food and sickness. That’s why when people ask me how I’ve managed to add so many foods back to my diet, including higher histamine ones, I attribute most of my gains to getting my diet right, but also fixing how my brain processes my body’s response to food and stress. I discuss my approach to healing this here and here. Don’t forget to check out my favourite book Anti-Recipes – a nutrient dense cookbook full of ingredients with antihistamine and anti-inflammatory ingredients. It’s dairy/nut/gluten free, with grain free options. The Anti-cookbook and all liquid Anti-Detox Book, don’t treat any conditions, but feature a plethora of the high nutrient antihistamine and anti-inflammatory ingredients that have been instrumental in helping me feed myself on a limited diet. The Anti-cookbook features a four page list of antihistamine and anti-inflammatory foods and comes in regular and Paleo. —-REFERENCES— “Conditioned taste aversion.” Wikipedia. Wikimedia Foundation, 21 May 2017. Web. 15 June 2017. “Classical Conditioning (Pavlovian Conditioning).” SpringerReference (n.d.): n. pag. Web Bernstein, Ilene L. “Conditioned food aversions as a consequence of cancer and its treatment.” PsycEXTRA Dataset (n.d.): n. pag. Web. Bernstein, Ilene L. “Conditioned food aversions as a consequence of cancer and its treatment.” PsycEXTRA Dataset (n.d.): n. pag. Web. “Domperidone.” Wikipedia. Wikimedia Foundation, 12 June 2017. Web. 15 June 2017. Dark, Kathleen, Harman V. S. Peeke, George Ellman, and Mary Salfi. “Behaviorally Conditioned Histamine Release. Prior Stress and Conditionability and Extinction of the Response.” Annals of the New York Academy of Sciences 496.1 Neuroimmune I (1987): 578-82. Web. “Chemoreceptor trigger zone.” Wikipedia. Wikimedia Foundation, 13 June 2017. Web. 15 June 2017. Wager, Tor D., and Lauren Y. Atlas. “The neuroscience of placebo effects: connecting context, learning and health.” Nature Reviews Neuroscience 16.7 (2015): 403-18. Web.
Share this on: