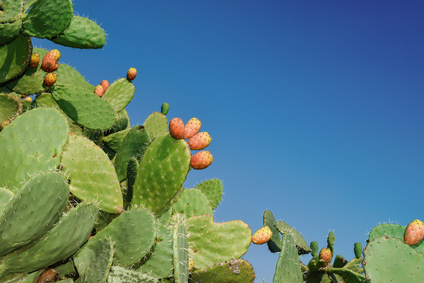 Researchers find that the prickly pear fruit, and the whole plant generally, prevent histamine release/allergic response by inhibiting mast cell degranulation (the process by which white blood cells leak histamine and other inflammation into the blood stream).

Opuntia is a genus in the cactus family. When speaking of the prickly pear, people usually mean O. Ficus-indica, which is also known in the states as nopales. Native Americans have been using prickly pear traditionally for their pain killing, anti-inflammatory, anti-cancer, anti-diabetic, anti-ulcer activity and now we have studies to back some of these uses.

An animal study published in the journal Cellular Immunology finds that a prickly pear extract inhibits the release of not only histamine, but also several other inflammatory/allergy mast cell mediators.

Research appearing in the Journal of Pharmacy and Bioallied Sciences also found that prickly pear stopped mast cell degranulation, more effectively than sodium cromoglycate, which is the most commonly prescribed pharmaceutical to treat mast cell activation. In this case animals had their mast cells provoked using an uncooked egg white solution (a common mast cell/histamine trigger), which then releases histamine and other inflammation.

Researchers have also found that prickly pear inhibits the MAO-B enzyme, but not MAO-A. I have the MAO-B gene variant and I still do inhibitors, in moderation. I would in this case happily eat the prickly pear, but might not take it as a supplement. Interestingly, doctors treating Parkinson’s now use MAO-B inhibitors as a first line of treatment for the condition. If you haven’t had genetic testing yet, you may find it useful – I had mine done by 23 and Me.

Betacyanin, an active principle compound in prickly pear, is believed to be responsible for the mast cell stabilisation, and therefore histamine release. Betacyanins include reddish to violet pigments and are found in rainbow chard and other brightly coloured fruits and vegetables.

These are just a few of the numerous studies in this vein, but please don’t forget – these were conducted on animals and the compounds used may be highly concentrated and filtered.

As someone previously diagnosed with histamine intolerance and now mast cell activation, I like to eat my medicine, and I do love prickly pears when in season. For a more controlled approach to mast cell issues, I use Neuroprotek, a bioflavonoid supplement created by Dr. Theoharides, one of the world’s foremost experts in mast cell issues.

I do not benefit in any way from sales of this product other than an Amazon commission if you order here in which case I thank you for supporting all the work that goes into researching, writing and self-funding this website.

I work my prickly pear fruit into salads and make it into an added-sugar free jam. In the states I frequently chop up some nopales (the green part) into salads or saute them with quercetin rich antihistamine red onions, antihistamine garlic and other vegetables, served alongside some anti-inflammatory vitamin K rich cauliflower or real rice.

But, diet alone wasn’t the answer. Retraining my brain helped me calm the body to allow it to accept food as a partner in healing rather than something to be feared. cognitive hypnotherapy and other methods I’ll share tasters of in my upcoming Healing the Brain to Heal the Body two hour online workshop on June 11th – book your spot here. Don’t worry if you can’t make it live, there’ll be a recording of the workshop available to you for viewing as many times as you like, as often as you like.

My books are full of ingredients like these – exclusively – there’s no garbage foods. Everything in my cook books is there for a reason. My current favourite, Man Food, reflects my diet as it is nowadays. The Anti-Cookbook features six pages of antihistamine and anti-inflammatory foods. The On the Go and DAO book are for people still transitioning to a healthier diet.

Löhle, Matthias, and Heinz Reichmann. “Controversies in Neurology: Why Monoamine Oxidase B Inhibitors Could Be a Good Choice for the Initial Treatment of Parkinson’s Disease.” BMC Neurology BMC Neurol 11.1 (2011): 112. Web.