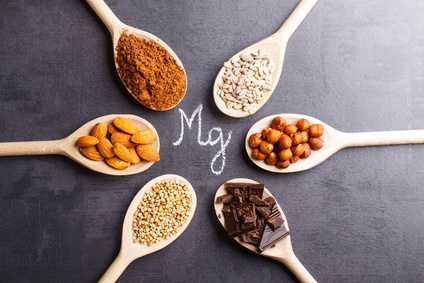 Did you know that something as simple as a vitamin or mineral deficiency can trigger histamine induced inflammation? While many deficiencies can be responsible for confusing symptoms when we’re doing everything else right, today I’m going to focus on one of the most likely contenders: magnesium.

Another study in the Journal of Nutritional Science and Vitaminology (yes, that’s a word apparently) tells us that magnesium deficiency has been linked to increased mast cells in the small intestine, kidney and bone marrow, and now in the liver.

In case you’re new to my website, mast cells are a part of the white blood cell system. They’re where histamine and other inflammatory molecules like prostaglandins, leukotrienes and interleukins live. Mast cells are triggered into dumping this inflammation into the blood stream when we need to fight an infection, or experience massive stress hormone release, general female hormone fluctuations, or are faced with an allergen. In some cases they’re just confused and keep firing even when there’s no reason for them to. The presence of mast cells generally indicates that inflammation is underway and I found even more studies showing that magnesium deficiency just generally contributes to inflammation. I don’t know about you, but I’d really rather not have inflammation in my liver (or anywhere else for that matter), so magnesium seems like something we should keep an eye on.

One of my core concerns with the extreme prolonged elimination “phases” I see people entering in to is the potential for vitamin/mineral deficiency and very real fear of starving the body.

Here’s how I fought my way back from elimination to reintroducing foods.

A friend with histamine intolerance was recently hospitalised for this very issue. It took them several months of IV treatment with nutrients to recover from the extreme deprivation.

Click here to learn how to create a histamine-balanced diet for yourself that prioritises nutrition over elimination.

The University of Maryland website tells us that magnesium is needed by the heart, muscles, and kidneys. It activates enzymes – the boy requires magnesium to product the histamine degrading diamine oxidase (DAO) for example –  and it regulates calcium, copper, zinc, potassium and vitamin D levels in the body.

Studies show that inhaled magnesium can help treat asthma attacks, treat depression and diabetes 2, among others.

About 400mg of magnesium is recommended daily for adults. You can get it from food, supplements or transdermal application (sprays and bath salts).

Not necessarily low histamine but not high histamine: sesame, sunflower and pumpkin seeds.

with the added bonus of ascorbyl palmitate, a type of corn-free vitamin C that I have chosen to use these last few years. As with all supplements there are contraindications and side effects so please do some research before trying anything new.

I’ve used pure liquid magnesium in the bath as a histamine soother for years (though I didn’t tolerate it at the start). Please remember that heat is a major histamine trigger (as per mast cell experts Dr. Theoharides, Dr. Luis Escribano and others) so a lukewarm bath may be more appropriate (but we’re all different, so go with whatever works for you).