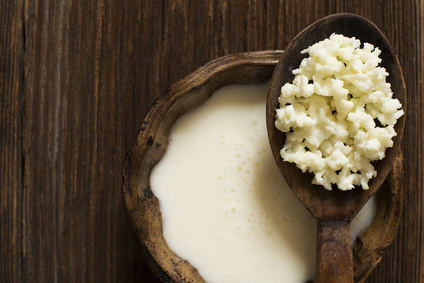 Fermented foods may block diamine oxidase (DAO) one of the histamine degrading enzymes. That’s why a while back I wrote a post with some tips on how to create histamine friendlier home ferments to try and help heal the gut. This week I have some more exciting news: another study on rice based kefir (rather than the traditional dairy) showing promise inhibiting histamine release in the gut [1]. That said, it may release or raise histamine generally (depending on many variables).

The animal study, conducted to determine if kefir could help prevent liver damage caused by a high cholesterol diet (it may), found that the amount of kefir at a lower dose did not increase serum histamine (meaning amount of histamine in the blood) but there was a small increase in higher dosing. They did find that kefiran showed a clear negative correlation with the concentration of histamine in the cecal content and feces.

As reported in the aforementioned post, I previously found a study which appeared in the peer-reviewed Biological and Pharmaceutical Bulletin of Japan, showing that rice kefiran (in test tube studies with mast cells) was able to inhibit mast cells exposed to an antigen (examples of which may be an allergen, bacteria or virus) from releasing TNF and other inflammatory cytokines that may be problematic for those dealing with histamine intolerance or mast cell disorders [2]. The general idea is that if there’s existing inflammation in the body, any bit extra is likely to cause a major response. You can read more about that here in my posts the inflammation bucket and wondering why you react to everything you eat?

Another animal based study published in the Archives of Pharmacal Research in 2008 found that milk kefir administered to the stomach substantially inhibited uncooked egg white inflammation of the lungs and . This response involves interleukins, eosinophils and others. Study authors concluded that kefiran may be useful for the treatment of inflammation of lung tissue and airway hyper-responsiveness in a murine model (mice and such) and may have therapeutic potential for the treatment of allergic bronchial asthma [3].

Right now I’m unable to find information on where to buy a rice based kefir starter, but I did find a probiotic supplement that contains them, but also has a number of probiotic strains Lane Labs Kefiran Nutrient+50 60 VCAP. If anyone has the time to look, please post the info below and I will add it to the post.

You’ll find many online recipes for making non-dairy kefir. I’ve read on a few blogs that less than 50% of the lactose remains in kefir grains but have not double checked that information.

Though this information seems promising, please remember the research was not conducted on humans and even if they were, individual physiology is very different for each of us and so please proceed with caution. Even a little bit of histamine released before the anti-inflammatory effects kick in may be too much for many people. Trying fermented foods before your health is stable may be inadvisable, please always consult a doctor before adding foods or supplements to your diet. Some general advice when starting something new is to start with minute amounts and not take it daily.

properties my books Anti-Recipes and The Anti-Cookbook