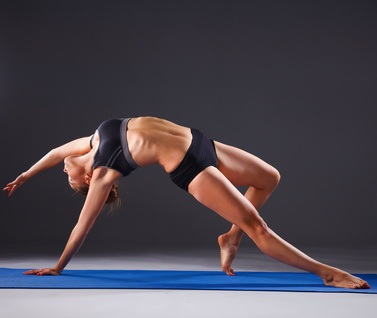 I reported a while back that yoga lowers inflammation in the body (see below), specifically C-reactive protein. Now here’s another reason to channel your inner yogi: pranayama lowers histamine levels.

I found a number of studies showing that yoga breathing (pranayama) considerably decreases histamine induced asthma symptoms (compared to placebo groups). The yogic breathing groups were able to cut back on their steroid inhalers [1] and also required a higher dose of histamine to induce an attack [2].

While you’re here…check out the other reason to try yoga!

Adding anti-inflammatory foods to your fight against histamine-induced inflammation? Why stop at food? The Huffington Post also talks about yoga’s role in reducing inflammation.

“The researchers found that the caregivers who participated in the yoga practice experienced a change in the response of 68 genes, leading to the decrease in inflammation. Inflammation has been linked with health problems like heart disease, depression, rheumatoid arthritis and diabetes, Scientific American reported [3].”

Here’s another study that I posted a while back:

Importantly, even though novices and experts did not differ on key dimensions, including age, abdominal adiposity, and cardiorespiratory fitness, novices’ serum interleukin (IL)-6 levels were 41% higher than those of experts across sessions, and the odds of a novice having detectable C-reactive protein (CRP) were 4.75 times as high as that of an expert. Differences in stress responses between experts and novices provided one plausible mechanism for their divergent serum IL-6 data; experts produced less lipopolysaccharide-stimulated IL-6 in response to the stressor than novices, and IL-6 promotes CRP production. The ability to minimize inflammatory responses to stressful encounters influences the burden that stressors place on an individual. If yoga dampens or limits stress-related changes, then regular practice could have substantial health benefits [4].

What this means for people dealing with mast cell/histamine disorders

Interleukins are one of the many inflammatory molecules released during mast cell degranulation. Histamine is another. So you can get histamine and other inflammation released from mast cells (and basophils and a few others) in addition to histamine we get from foods. My research and conversations with specialists tells me that I need a supply of dietary histamine in order to help the body function (histamine is needed for wakefulness, as a neurotransmitter and much more). So I still eat higher nutrient higher histamine foods, while practicing meditation (also shown to switch off a number of the genes involved in mast cell disorders) and yoga daily, to balance things out.

CRP is something we want low, no matter whether we have a mast cell disorder or not…

I try to do at least seven hours of yoga weekly – vinyasa flow and anusara are the styles I practise. You don’t have to do this many hours at all. I just love to exercise now that I finally can again!