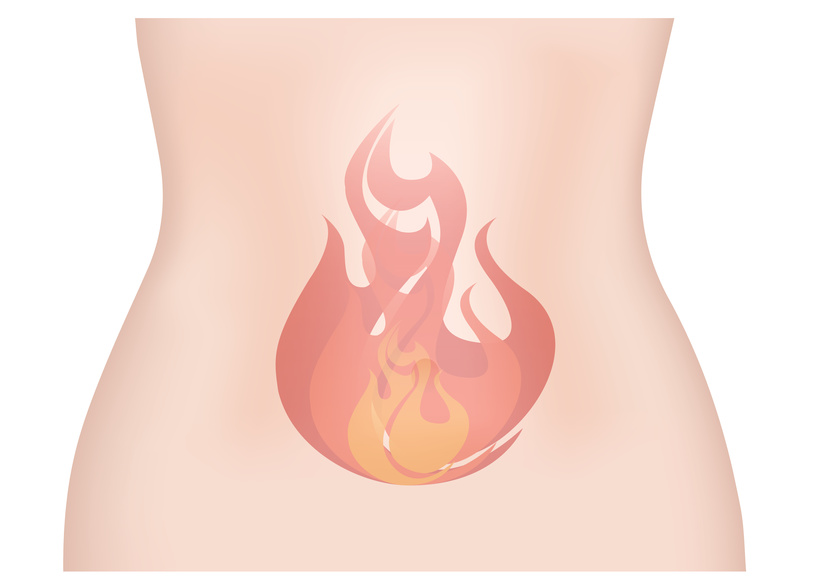 GERD (Gastroesophageal Reflux Disease) or “acid reflux” is a common complaint among those with mast cell or histamine disorders. Many people think the only answer is a pharmaceutical drug –usually a histamine H2 blocker or a Proton Pump Inhibitor (PPI). While this approach may be necessary for some, I like to look at natural solutions first.

Gastroesophageal Reflux Disease–GERD for short–is a condition in which stomach acid backs up into the esophagus, causing a wide range of symptoms. Some of the ways that GERD can show up include heartburn, a chronic cough and/or laryngitis, bad breath, and even erosion of the teeth. One cause of GERD may be issues with the sphincter that separates the stomach from the esophagus. If this Lower esophageal sphincter (LES) has lower resting pressure, so it doesn’t close all the way when it should, or a tendency to randomly relax, that can cause stomach contents (including acid) to leak through this valve –back into the esophagus. This can be caused by a hiatal hernia and other factors. Another cause is the poor movement of food through the digestive tract, including the stomach, increasing the likelihood of partially digested food ending up back in the esophagus or causing distention of the stomach and opening up the LES valve. A key cause for histamine sufferers is oxidative stress and food intolerances. We already know chronic inflammation is part of our challenge with histamine intolerance and clearly, some foods are also aggravating. Gluten is one of the main intolerances/allergies that has come up in studies as being significantly associated with GERD symptoms. So if you’re still eating gluten, here’s your sign that it’s time to say “Sayonara.”

WHAT’S THE CONNECTION WITH HISTAMINE?

Histamine release by cells in the mucous lining of the stomach promotes the production of stomach acid by binding with histamine H2 receptors. That’s why H2 antagonists, like Proton Pump Inhibitors (PPIs) work to block stomach acid production. It’s possible that the increased histamine is causing increased stomach acid, but the inflammation and oxidative stress may also be making tissue inside the more susceptible to injury. Research has shown that increasing your antioxidant intake helps.

WHAT TO AVOID IF YOU HAVE ISSUES WITH GERD

There are certain foods and substances that can possibly be aggravating if you have issues with GERD. A lot of these we are already avoiding due to high histamine levels, but they are generally said to be alcohol, tomatoes, citrus, chocolate, caffeine, fatty foods (including nuts and seeds) and spices. However, Norman Robillard, a microbiologist who wrote the book, Fast Tract Digestion, has written that these foods as GERD provokers has largely been debunked in studies. He suggests that it is actually fermentable carbohydrates that are the problem, as the gas produced by their fermentation causes the LES to remain open. And in fact, research has shown that a low carb diet helps relieve GERD.

Slippery Elm There are some natural herbs that have been found to help lessen the heartburn associated with GERD episodes. These are known as demulcents. Demulcents can provide heartburn relief within minutes. They are great to take after meals or just before bed. One of these herbs is Slippery Elm. Slippery Elm is soothing to the tissues and is a good source of antioxidants to help address the oxidative stress/chronic inflammation. Add a tablespoon of Slippery Elm bark powder to water or a cup of tea. The powder has been shown to be more effective for GERD than the capsules or lozenges. Marshmallow root Another one is marshmallow root. The root –not those white fluffy things you toast over campfires. Marshmallow root was shown in a 2015 animal study to be able to prevent histamine release, providing protection against stomach ulcers. Try marshmallow root tea to address GERD while at the same time preventing your body from releasing histamine. Now that’s a definite win-win.

Curcumin Curcumin may be another solution. In a 2010 study of 14 people on proton-pump inhibitors (PPIs) or H2 receptor antagonists, 2 grams per day of curcumin was given. After 2 weeks, everyone came off their medication. Two months later, 11 out of 14 were completely without symptoms and no longer needed medication. The 3 who did not respond to the curcumin treatment needed a lower dose of PPI than before. Enjoy some turmeric/golden milk tea before bed, and see how you feel.  Curcumin may affect the diamine oxidase (DAO) histamine degrading enzyme.  Nigella Sativa  Nigella has been used for digestive issues, including GERD, traditionally throughout Asia. Multiple studies back its effectiveness as an H2 receptor antagonist (antihistamine). You can read more about nigella here.

Practice Mindful Eating Be deliberate about how and when you eat. Slow down when you eat and focus on chewing well –Digestion begins in the mouth. Let your saliva coat and start breaking down food, and don’t dilute your stomach acid by consuming fluids with meals. Stop eating when you are 80% full rather than to the point of feeling stuffed. Being overfull isn’t great for your LES, which is trying to keep the stomach contents in the stomach. Don’t Eat Close to Bedtime It’s also not good to lie down close after eating, so don’t eat close to bedtime. Instead, try some relaxing tea. Chamomile just happens to be a great relaxing herb, an antihistamine, and a soothing, healing herb for acid-damaged tissue in the esophagus. And as you get in bed, here’s another tip: studies have found that the side you sleep on matters. Sleep on your right side after eating a meal, and you’ll have worse GERD symptoms. Sleep on your left and your symptoms may improve.  ————REFERENCES————— Hawrelak JA. 2010. Gastro-oesophageal Reflux Disease. In: Sarris J. Wardle J. Clinical Naturopathy: An Evidence-based Guide to Practice. Churchill Livingstone. Sydney.   Pointer, S. D., Rickstrew, J. , Slaughter, J. C., Vaezi, M. F. and Silver, H. J. (2016), Dietary carbohydrate intake, insulin resistance and gastro‐oesophageal reflux disease: a pilot study in European‐ and African‐American obese women. Aliment Pharmacol Ther, 44: 976-988. doi:10.1111/apt.13784 Ramsay, D. B., Stephen, S., Borum, M., Voltaggio, L., & Doman, D. B. (2010). Mast Cells in Gastrointestinal Disease. Gastroenterology & Hepatology, 6(12), 772–777. Robillard, N. (2014, September 18). GERD diet that works without drugs. Retrieved from: https://digestivehealthinstitute.org/2014/09/18/gerd-diet/ Yarnell E. & Abascal, K. (2010). Herbs for Gastroesophageal Reflux Disease Alternative and Complementary Therapies, 16(6), 344-346. Zaghlool, S. S., Shehata, B. A., Abo-Seif, A. A., & Abd El-Latif, H. A. (2015). Protective effects of ginger and marshmallow extracts on indomethacin-induced peptic ulcer in rats. Journal of Natural Science, Biology, and Medicine, 6(2), 421–428. http://doi.org/10.4103/0976-9668.160026
Share this on: