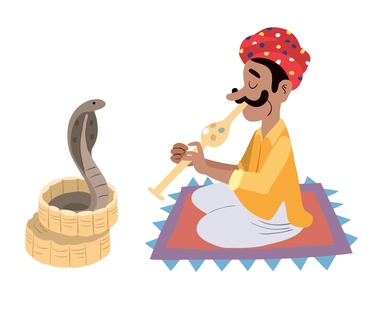 Did this image of an Indian dude charming a snake pop into your head like it did mine when I first considered the idea of hypnosis? Hypnosis has come a long way since the early days of freaky Sigmund Freud-like men waving a pendulum across the gaze of a googly-eyed female being treated for hysteria, or some such nonsense. Or even the days when it was administered to me by a faith healer who claimed I needed to enter another dimension, through hypnotic trance, in order to heal my ethereal body, to then heal my body on this physical plane. I was a very different person back then (obviously), in my pre-journalist days. Every wacky healing system, usually incredibly expensive, was fair game as I tried to heal myself. Many worked, for a short time, before bleeding me dry, and leaving me washed up on the shores of despair. Nowadays I require a little more evidence of efficacy before taking the plunge, but never totally rule out some of the nuttier stuff.

When hypnosis entered my mind again for the first time in decades, I decided to see if there was any scientific basis for its use treating the symptoms of histamine intolerance or mast cell activation disorders. I found it, in spades, but most of the studies used a small sample size (meaning not very many study participants). That said, there’s quite a few of them out there, but here’s a breakdown of the studies that convinced me to take the plunge again.

I’ll share my recent experiences with how the hypnosis treatment is going just after these bullet points:

European Journal of Allergy and Clinical Immunology in 20o1 hypnotised 15 highly hypnotically susceptible subjects to be happy, angry or sad, and then injected them with histamine. Subjects who were happy or angry had slower reaction times to the histamine, but there was no effect on wheal size. They conculded that mood was a very good predictor of cutaneous (skin) immediate type reactions. I think it goes far beyond this – I know in my own experience that expectations of outcome relating to histamine reactions has decreased the intensity of my anaphylactic episodes (which I no longer experience). I struggle to convey the importance of attitude to sickness in my writings (it seems so anyway, due to the volume of emails I still get asking what my secret to healing is). I literally woke up one day and decided I was no longer sick, not because I had any evidence to back this up, but rather because I had decided that my sadness, my depression, were making me sick, not the other way around. I have experienced first hand the histamine-intensifying effects of sadness on my symptoms. Most interesting about the study though was that its findings confirm the conclusions of others in relation to hypnotic susceptibility and increased reactivity to an allergen. This is something that came up in many of the studies I read. I have always known that I am highly susceptible to trance-like states. Apparently scientists believe that it makes me more reactive to allergens generally

Hypnosis can decrease the size of skin histamine reactions [2]

Researchers at the Institute of Psychology in Denmark found that highly susceptible hypnotised subjects were able to reduce the size of wheals induced by histamine prick tests, but the reaction itself did not respond. I found the wording of the study a alittle confusing but I took it to mean that the reaction/wheal didn’t completely resolve. Subjects were unable to increase the size of the wheal nor the intensity of the reaction however. The authors share that their study “objectively supports numerous uncontrolled (meaning not using subjects who were not hypnotised as a “control” something scientists don’t consider valid in most cases) case reports of modulation of immunoreactivity in allergic diseases involving both type 1 and type 4 skin reactions following hypnotic suggestions.”

I wasn’t entirely surprised to find a study on guided imagery and hypnosis to lower histamine levels used on children with chronic migraine in a book called Hypnosis and Hypnotherapy with Children by Daniel P. Cohen and Karen Olness. Migraine, as I’ve mentioned in other posts, is a mast cell/histamine issue, at least according to the research of Dr. Theoharides [4] which shows that mast cell products are “known to be increased in adult migraneurs” also. Dr. Theoharides study, quoted in the book, randomised 30 children with migraine to learn self-hypnosis or not (the control group). Tryptase and histamine levels decreased in urine, corresponding to those who experienced a drop in migraine frequency, “suggesting that the mechanism of reduced migraine episodes was due to stablisaton of mast cells.”

The same book quotes a study by Castes, Hagel, Palenque et al., 1999, that taught relaxation, focusing on mental images to suppress mast cell degranulation and open airways. Meaning that people specifically visualised themselves stablising their mast cells, something I practiced for many months a few years ago till I no longer needed to. They were followed for six months, during which time they showed decreased IgE responses to allergens in comparison to 16 control subjects. They also had fewer asthma episodes and increased lung function.

For those who are not familiar with mast cells: they’re a part of the white blood cell/immune system. Histamine, along with other inflammatory mediators like tryptase, prostaglandins and interleukins (to name just a few) live in mast cells (and other white blood cells like basophils), happily protected from our system, until there’s some kind of a crisis like injury, bacterial or viral infection, at which point mast cells break open, in a process called degranulation, and dump the inflammatory mediators into the blood stream to start attacking the problem. In some people though, like those with mast cell activation disorders, or perhaps even what’s known as histamine intolerance by some practitioners, the mast cells are dumping inflammation into the body when it’s not needed, either because they’re triggered by allergies, stress, digestion or other unknown factors. I long ago understood that the key to controlling my histamine issues was to stabilise my mast cells and that eating a diet low in histamine wasn’t the answer – eating a high nutrient anti-inflammatory diet generally, while including really nutritious higher histamine foods, was going to heal me. How did I get there initially? As I say, attitude, stress relief, meditation and an excellent diet helps.

Hypnosis can mediate the perception of histamine reactions [6]

A study published in Germany’s highly respected Archives for Dermatological Research had researchers hypnotise ten highly susceptible subjects, injecting their arms with histamine. Subjects were then given hypnotic pain relief suggestions for one arm but not the other. Subjects experienced an average reduction in felt pain of 71% and “a significant difference was measured in the histamine flare area between the pre-hypnotic and the hypnotic analgesic condition…” This to me, though a small sample, was really exciting. They conclude that (in English) the brain (higher cortical processes) can mediate not only the perception of histamine-induced pain, but also seem to say the wheal size itself. This has also been my experience and the answer to how I was able to re-introduce so many amazing foods into my life by changing my thought processes. But there’s only so much I’ve been able to achieve alone, and that’s how I arrived on cognitive hypnotherapist Hazel Gale’s doorstep.

My appointment with Hazel was a happy coincidence. Having convinced myself to spend the money on what’s still considered an “alternative” treatment in certain circles, I reached out to London’s top guy – only to be told he was fully booked but luckily the practitioner he himself goes to for treatment had a last minute opening for me. I immediately dove into her website and was really excited to see that she had healed herself from M.E.! Wonderful news as I have seen an emerging body of research pointing to M.E./Chronic Fatigue Syndrome being mast cell related. She’s a driven lady – a sportswoman, who competes on a national amateur boxing level. We totally click the moment I walk into her practice and I suddenly know this is going to be a life-changing event. We dive into my past, trying to identify moments in my life where I developed beliefs relating to illness. I know most of them:

1. Being exposed to the smell of cheese and throwing up when my parents were discussing divorce.

2. Feeling that the only way my mother would pay attention to me was if I was sick. I remember many trips to various countries so my mother could diagnose my “allergies”.

3. Faking ear aches and allergies to stay home with my big brother who I dearly loved but was rarely with us.

4. Not liking the clown style make up being put on kids at a birthday party I attended and insisting they needed to use a very elegant Christian Dior blue make up compact I had taken from my mom’s bag instead. I told them I had allergies (false).

5. Being at the end of my rope with my weight gain and asking the universe to do something to make me stop over eating.

With Hazel, the process of working with those learned behaviours, that became beliefs, that turned into my reality, is pretty simple. But it’s going to take time. I was pretty surprised that she doesn’t work with deep trances, the kind I’ve experienced before, but because I’m so susceptible, it doesn’t seem to be a problem. In the weeks since starting my treatment with her, I’ve become aware (again) of the negative self talk that leads my body to continue to believe it is sick, when it most obviously is not. All evidence points to my being healed, I just keep slipping into negativity quite easily it seems, though I honestly believed I had dealt with all that.

Hazel taught me a technique for dealing with negative thoughts (desaturate the picture and push it away from you – your technique would vary – this is based on how I process information) and then identified the last time I felt totally in control (doing a yoga handstand). This is an image I know work with when I feel I’m losing control of my emotions.

So far I can report that I am feeling pretty incredible. No anxiety, clearer thought. Happier. Adding back supplements (something that have historically been an issue for me) at record speed. This whole eating anything I want means I’m going to really have to watch what I eat!

Whoops, did I really just say that? That’s how easy it is to develop new negative thoughts that affect our present reality. Cogito ergo sum (I think therefore I am) is all well and fine, but in my case, what I think affects how I can eat.