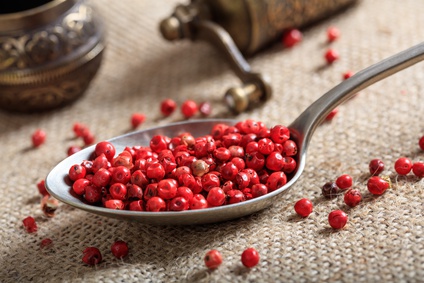 UPDATE: I made an error, though I know perfectly well these are pink rather than red, I somehow ended up goofing. I’m also moving further up in the post that this tree is a member of the cashew family so care must be taken if allergic to nuts.  It turns out that my favourite pepper, isn’t a pepper at all, but rather a berry with antihistamine properties. This Brazilian tree fruit with a lightly spicy flavour is dried and sold  alongside with green and black peppercorns. As with tea,  green, black and white peppercorns are actually the same thing,  just processed differently. I’ve always wondered why I do better with white pepper than black, but pink peppercorns better than any of them.  Well, the antihistamine properties are a great explanation. A study published in the peer-reviewed journal International Pharmacology found that an extract of the Brazilian pepper tree significantly prevented mast cell degranulation induced histamine related swelling and allergic reaction. *Mast cell degranulation is the process  by which mast cells release histamine and other inflammation into the blood  stream. Histamine intolerance is generally attributed to a lack of  the histamine degrading DAO (diamine oxidase) enzyme, while mast cell activation can be triggered by a primary condition (i.e. infection, medical condition, chronic stress, mold exposure and many others) or to be one itself. Stress is a huge mast cell activation cause, as it was in my case. Interestingly this tree is a member of the cashew family, which means it may not be appropriate if you have an allergy.  You’ll have to check with your doctor. In a case like this, I won’t go out and consume a supplement of this every day, I’ll just combine it with other foods that have antihistamine and anti-inflammatory properties. The magic happens when all these amazing things come together. As for the rest: Green peppercorns are the raw product preserved in brine. Black peppercorns are dried green peppercorns. White peppercorns are just peeled black peppercorns. My issue with black pepper (in massive quantity anyway)  perplexed me for some time: it isn’t high histamine, it isn’t  inflammatory.  Then I learned about oxalic acid, a plant defence mechanism  (to deter predator insects) that can also work as an irritant to humans, and it all came together. White pepper is lower oxalate than black (but I have no idea about red, sorry). You can read my post on oxalic acid here. At the end of the day, there are very few foods I do not include in my diet. Some, which appear on more than one list, for example high histamine, high oxalate and high salicylate, have proven to be problematic and so I eat little of them, but they’re still in there. I’ll do this sometimes just on principle, because I don’t want to fall into the elimination mindset again that left me eating five foods only. Learn how I got out of the elimination mindset and how you can use this information to create your own histamine balanced diet and healing plan here.